The History of the Library

The Kalocsa Archdiocese was originally set up by King Stephan I of Hungary. Archbishop Asztrik, the first archbishop of the diocese (1000-1015), ordered the building of a church and an archbishop's house. King Stephen in his Second Book of Laws (De regali dote ad ecclesiam) ordered that for each church built the bishops must provide a priest and books. That is why in the Cathedral in the room next to the sacristy, prayer books and the Bible could be found. These first few books formed the basis for the Cathedral library.
At the diocese a cathedral chapter was in operation from the beginnings which was responsible for church services, managing the Cathedral school and for the activities as places of authentication – all of which would not have been possible without the aid of books. The highly educated archbishops of the era collected and read the books of the library. Many of them studied at universities abroad. For example, Archbishop György (1050), Simon (1135), who was also a linguist, or Ugrin Csák, a great speaker of his time, who died at the battle of Muhi.
In later centuries, the collection of the library expanded as a result of book acquisition activities of science enthusiast dignitaries of the Church. The earliest written records of the archbishops' book acquisitions date back to the 15th century. István Váradi (1457-1471) visited the universities of Kraków, Vienna, Padua and Ferrara where he also bought books. One of the major humanist scholars of the century was chief priest György Handó (1478-1480). His biography was written by bookseller Vespasiano da Bisticci . Another prominent archbishop of the Renaissance was Péter Váradi (1481-1501) who was the chancellor of Matthias I, King of Hungary. Five of his books are preserved in different libraries. László Geréb (1501-1503) during his time as Archbishop of Kalocsa, bought codices in expensive book covers.
Unfortunately, it is impossible to tell the exact number and titles of books in the collection at that time but according to some estimates, the library had more than 300 books. 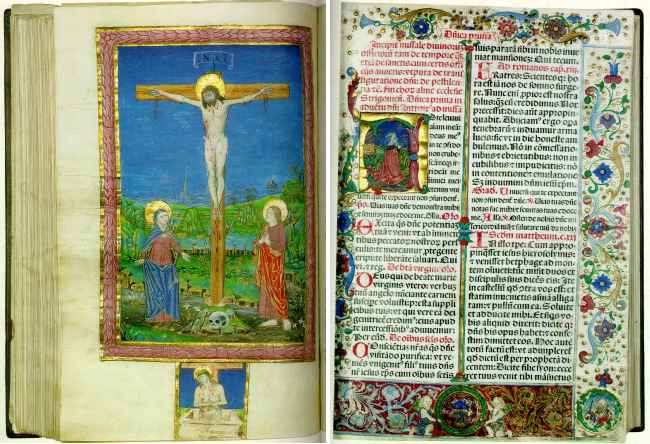 Hand-painted pages from the missal of Péter Váradi, Archbishop of Kalocsa (1481-1501)

Pál Tomori was the Archbishop of Kalocsa during one of the most severe ordeals in the history of Hungary. He was commander-in-chief of the Hungarian army in the battle of Mohács where he lost his life. Following his death, Kalocsa had no archbishop or lord of the manor. On 15 August 1529, Suleiman and his armies occupied the town of Kalocsa. Fleeing members of the cathedral chapter took the valuable books with them which, unfortunately, later got lost or destroyed. Out of the books that were saved only two were returned to Kalocsa.
The Ottomans left Kalocsa after the re-occupation of Buda in 1686. Following the occupation, the dioceses were in ruins so the archbishops started re-building them. Simultaneously with the re-building work, the acquisition of books could also restart. Under the Kollonich Convention (1715) every bishop was bound to bequeath their books to the diocese or to its library. Thus steadily a significant collection started to grow.
Besides the archdiocese, the chapter which was reorganised in 1738, already possessed a large collection, after the chasing out of the Ottomans, in the first half of the 18th Century. This library was situated in the sacristy next to the Cathedral where the old library had been before. The collection of cathedral chapter or Bibliotheca Venerabilis Capituli Colocensis  expanded during the time of Archbishop József Batthyányi.

In 1776 József Batthyány, Archbishop of Kalocsa, was appointed Archbishop of Esztergom and the vacated archiepiscopal seat was taken by Ádám Patachich, bishop of Nagyvárad. Archbishop Patachich brought 7825 volumes with him from Nagyvárad to Kalocsa. In 1780 the library room was completed in the east wing of the Archbishop's Palace, decorated with wooden panel paintings in Grisaille by Anton Maulbertsch. In the large, 23-meter-long room with eight windows the books were stacked along the walls, in three rows in the middle of the room and on desks. All of the books were covered in brown gilded leather bindings. In 1782 the private collection of Archbishop Patachich and the cathedral library were brought together. The library was extended with the help of the archbishop's salesmen who bought every newly published book for the Archbishop's collection. The bishop had connections with booksellers in Vienna and Rome and he regularly exchanged letters with booksellers in Hungary to gather information about the latest news of Hungary's book market.
During his time as Archbishop of Kalocsa, the number of books in his collection significantly increased. At his death in 1784, the collection consisted of 19,000 volumes. In his last year, he left his books to his successors along with the ownership of the cathedral and the chapter. According to his last will and testament, the owner and maintainer of the Bibliotheca Metropolitanae Ecclesiae Colocensis shall always be the Archbishop of Kalocsa. 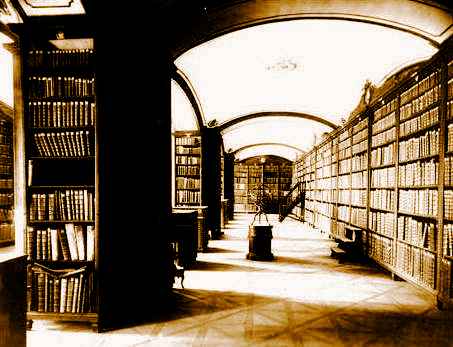 Following the death of Archbishop Patachich, László Kollonich(1787-1817) was appointed the Archbishop of Kalocsa who was also a great lover of books. He bought valuable books in large quantities from the libraries of the monasteries suppressed by Joseph II. Due to his acquisition work, the library was extended with incunables and manuscripts. Archbishop Kollonich collected a considerable amount of geography and topography books and maps, however, his main interest in books apart from theology was history. At his death, the size of his private collection was 23,000 volumes.
To this day, the 18th century collections of these two bibliophile archbishops are the core volumes of the library. These 42,000 volumes have very important cultural-historical and scientific value. 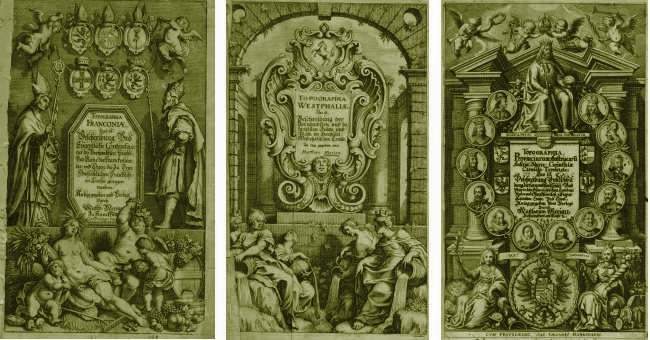 In later years, the collection was extended by books bequeathed to the library by archbishops and canons. In the second half of the 19th century, the number of readers and borrowers increased as a result of education system of Kalocsa. Among the 19th century archbishops who expanded the library with literary books the most significant was Cardinal Lajos Haynald who was also a scientist of high repute and an avid collector of books. Archbishop György Császka collected books in the topic of history, genealogy and heraldry. Gyula Várossy was a researcher of history and literature. His heritage includes books in these topics in Hungarian, German, French and English. Archbishop József Grősz collected mainly works on the study of the Bible and other religious books. 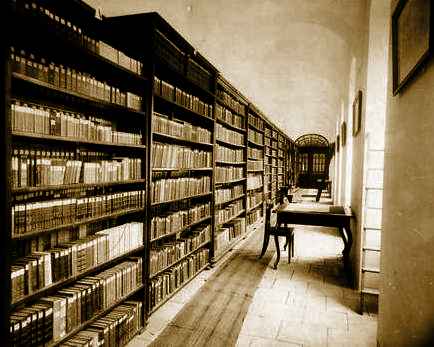 By the 20th century, the collection became so large that the library was taking up almost every room in the east wing of the Archbishop's Palace both on the first and the second floor. After 1945, the library operated under adverse financial conditions. The main source of books remained to be the bequests of priests (e.g. János Hopf, Lipót Huber, Gyula Tantos, István Szedlay, Ference Kujáni). The library was temporarily closed down from 1951 until 1962.
The collection today numbers approximately 150,000 volumes. New books that are added to the library are mostly in the subject of theology, philosophy, history, cultural history, and at the requests of the readers, social sciences such as pedagogy, sociology, law etc.). We are currently refreshing the catalogues of our library and working on the electronic database, as well. The library is a public library of science that can be used both by readers and researchers. The number of the readers and researchers of our library is increasing year by year and we are constantly improving our services to meet the criteria of our modern world. The 18th century Baroque Patachich room can be visited within a guided tour from 1 April until 31 October. On the exhibition corridor of the library and in the Patachich room there are exhibitions displaying the most unique and valuable editions of the collection.

Photos of the reading room today