The history of the archdiocese

The foundation of the diocese is linked to the name of King St Stephen. The first archbishop, Asztrik (1000-1015) built a church and a residence for the archbishop. Our apostolic king in his second Decree (De regali dote ad ecclesiam) gave instructions that the bishops were responsible for providing priests as well as books for the churches that were built. For this reason the Bible and prayer books were placed into the room adjacent to the sacristy of the cathedral. Those few books provided the basis for the cathedral library. 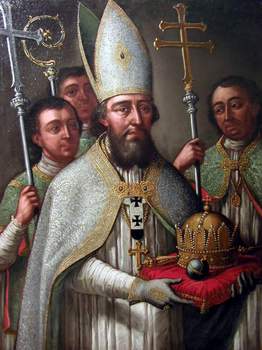 Right from the beginning a chapter served at the archiepiscopal centre. Besides celebrating mass, its responsibilities included the direction and proper management of the cathedral school. For these activities the use of books were necessary. The highly cultured archbishops of the era, of whom many had studied at universities abroad, collected and read the books. Among them were, for example, Archbishop György (1050); the linguist Simon (1135); or Ugrin Csák, an outstanding orator of his time, who lost his life on the battlefield of Muhi.

Later centuries saw a significant increase in the number of books, as the science-nurturing prelates continued to collect them. There are written mementos of book purchases by the archbishops of the 15th Century. István Várday (1457-1471) visited the universities of Krakow, Vienna, Padua and Ferrara, and bought books there. Among the well known humanist cultured prelates of that century is György Handó (1478-1480). His biography was written by the book merchant of Firenze: Vespasiano da Bisticci. Another outstanding archbishop of the Renaissance, Péter Váradi (1481-1501) was the chancellor of King Mátyás. Five of his books are being kept safe at various places today. While László Geréb was archbishop at Kalocsa (1501-1503), he purchased some expensively bound codices.
A reconstruction of the library’s stock in the Middle Ages, and an estimate of the number of books then held, is almost impossible today. Some reckon that the number of books certainly exceeded 300 volumes.

Of the archbishops of Kalocsa in the 16th Century to the name of Pál Tomori is linked one of the greatest trials the Hungarian nation. The archbishop, who was commander-in-chief of the Hungarian army, lost his life on the battlefield of Mohács. Thus Kalocsa remained without an archbishop and lord defender. On 15th August 1529 the troops of Suleiman occupied the city. The escaping members of the chapter took the valuable volumes along with them, but unfortunately these became lost later, and had never been recovered. Of the rescued books only two volumes ever returned to Kalocsa.
The Turks left Kalocsa in 1686, after the recapture of Buda. The archbishops returning to their seat had found only ruins, and started the rebuilding. Along with the rebuilding, the acquision of books could also restart. Under the Kollonich Convention (1715) every bishop was duty bound to bequeath his books to the diocese or rather its library. Thus steadily a significant collection started to grow.

Besides the archiepiscopy, the chapter which was reorganised in 1738, had already possessed a large library, after the chasing out of the Turks, in the first half of the 18th Century. They placed that library in its old spot, into the room adjoining the sacristy of the cathedral. The library of the chapter, called Bibliotheca Venerabilis Capituli Colocensis grew further during the archiepiscopate of József Batthyányi.

In 1776 József Batthyány, archbishop of Kalocsa, was appointed archbishop of Esztergom, and the vacated archiepiscopal seat was taken by ádám Patachich, bishop of Nagyvárad. The new archbishop brought 7825 volumes with him from Nagyvárad to Kalocsa. In 1780 in the east wing of the archiepiscopal palace a Baroque library room was completed, decorated by the grisaille wooden panels of Anton Maulbertsch. In the spacious, 23-metre long room, with eight windows, along the walls and in the centre of the room in three columns, plus on top of well arranged writing desks, the books were lined up in their uniform brown, gilded leather covers. It was in 1782 that the chapter library and the private collection were brought together. The archbishop extended his library through agents who bought up the books that reached the book market. The bishop kept in contact with book merchants in Vienna and Rome, as well as merchants within Hungary, and was well informed of the market.
During his time as archbishop of Kalocsa the number of books increased significantly. At his death in 1784 his collection numbered 19,000 volumes. In a document dated the same year he bequeathed his books to his successors for joint ownership by the main cathedral and the chapter. According to his last will and testament, the Bibliotheca Metropolitanae Ecclesiae Colocensis is to remain under the ownership and maintenance of the central chapter and the archbishop of Kalocsa at any given time.

László Kollonich (1787-1817) followed Archbishop Patachich in the episcopal seat. Like his predecessor, he was also a lover of books and bought up large numbers of valuable volumes from the libraries of the monk’s orders dissolved by József II. The collection of incunabula and manuscripts was further enlarged through his purchases. Archbishop Kollonich’s geography, topography and map collections are greater than his predecessor’s, and besides theology, the auxiliary science of history also appears as a main root for collecting. At his death the diocese inherited his library of 23,000 volumes.
To this day the collections of these two book-loving archbishops of the 18th Century provide the seed of the Cathedral Library. These 42,000 volumes represent its uniqueness, cultural history and scientific value.

Later the stock increased mostly from the bequests of archbishops and canons. In the second half of the 19th Century - due to the development of a network of schools in the city - the number of readers, borrowers grew. The archbishops of the 19th Century expanded the library with the literary products of the era. Outstanding among them is Cardinal Lajos Haynald, an eminent scientist and book collector. Archbishop György Császka collected books of history, genealogy, heraldry. Gyula Várossy was a researcher of history and literature. His bequest in these subjects consist of books in Hungarian, German, French and English languages. The bequest of Archbishop József Grősz consists of works about modern priestly activities and biblical science.

In the 20th Century the Library struggled due to lack of space. It occupied almost every room on the first and second floors in the east wing of the archbishop’s palace. After 1945 it operated under unfavourable financial conditions. Its main source of acquisitions was still the bequests from priests (e.g. János Hopf, Lipót Huber, Gyula Tantos, István Szedlay, Ferenc Kujáni). After the temporary closure (1951-1962), the researchers’ number lagged for a long time, as compared with the data of the first half of the 20th Century.

The books today number 130,000 volumes. First of all theology, philosophy, history, cultural history  and taking into account the requirements of readers ─ social sciences (teaching, sociology, law, etc) are the subject that boost the purchases. Work is in process to reclassify the stock and to prepare a catalogue on the computer. It is a public, scientific library for the use of readers and researchers alike. The number of its users, both readers and researchers, is growing from year to year, and the services it offers constantly widen, taking into account our modern requirements. The Baroque Patachich Room from the 18th Century can be visited via a conducted tour from 1st April to 31st October. In the hall and in the Patachich Room various displays introduce some of the more valuable and rarer pieces of the library to the visitors.