The 18th-century Patachich Baroque Reading Room of the Cathedral is housing the “World Religions” temporary exhibition this year. During the walk tour through the reading room visitors can see a selection of our documents about forgotten religious cultures of ancient times representing different world religions. The first formed religious system about which we may have some information thanks to various archaeological findings is the so-called Megalithic religion. Its existence is proved by megaliths – large stones - used in cult installations and burial structures. The religion itself was named after them. The most famous one of these structures is the Stonehenge in England, a German description of which with an engraving from the 18th century is displayed. The oldest written documents of the collection are from the ancient Mesopotamia.  The terracotta clay and rolling pin written in cuneiform is from the era of the priest-king Gudea of Lagas from the ancient Mesopotamia (around 2500 BC). In addition to the precious objects, famous constructions of the ancient Mesopotamian religion, “ziggurats” - temple towers - stretching to the sky are featured on engraved plates in Olfert Dapper’s book called “Asia” published  in Nuremberg in 1681 and in Köhler – Weigel’s “Orbis Descriptio Antique” (“Description of the Ancient World”) atlas from 1720 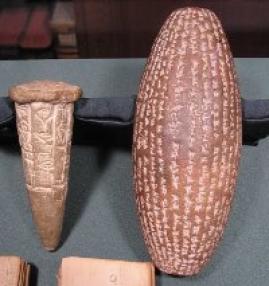 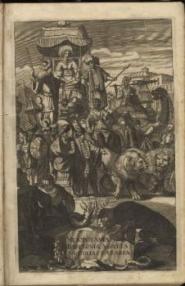 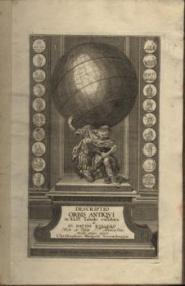 The colourful religious mythology of the ancient Egypt is represented by a number of beautifully illustrated works. The real character of the Egyptian religion was the faith in afterlife. The monumental pyramids prove that the matter of life after death was essential. The magnificent pyramids, the ornate sarcophagi, hieroglyphics and pictures painted on the walls of tombs appear in the works of Athanasius Kircher and Laurentius Pignorius in the 17th century. 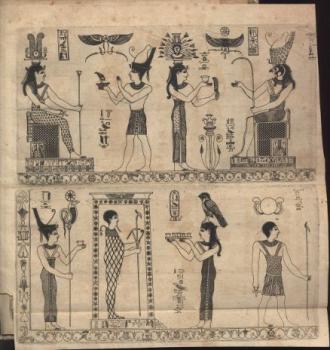 Today, most of the public knows the stories of the Greek mythology from the Roman poets’ narratives. The richest in this regard is the Roman poet’, Ovid’s “Metamorphoses” (“Transformations”). Homer's Trojan War epics - the Iliad and Odyssey – describes the Olympian gods. Ovid's "Transformations" was published by the Schöffer printing house in Mainz in 1545, Homer's Odyssey was printed by Alexander Weissenhorn in Augsburg in 1538. 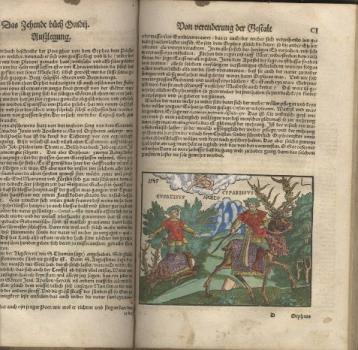 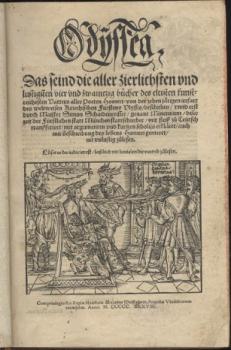 The religion of the once flourishing empires on the American continent disappeared without a trace along with the peoples living there. Compared to the Mayans peaceful, pious, scholarly beliefs Central America's other great imperial culture created by the Toltec-Aztec was much more militant and aggressive. Among the world’s great religious cultures only the Aztecs culture is characterized by mass human sacrifice: tens of thousands of prisoners were sacrificed every year to feed and appease the gods. A multi-volume collection called “America” was published by the Flemish engraver, Theodor de Bry at the end of the 16th century. Thanks to the magnificent engravings, the descriptions in the book played a major role in forming the New World image in European public opinion. Matthäus Merian (1593-1650) a Swiss publisher, printer, engraver and artist who is especially known for his  topography work published “Newe Welt und Historien Americanische” (“New World and the American History”) in Frankfurt in 1653 and contains illustrated reports on the bloody rites of the Aztecs. 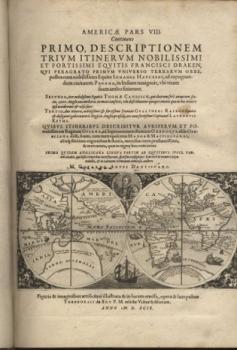 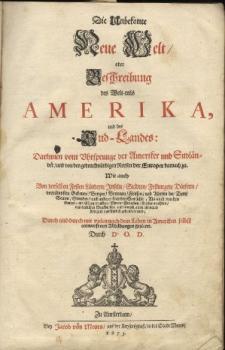 The Jewish religion is presented in several spectacular documentaries. The exhibition shows the first printed Torah from 1521 and the Rabbinic Bible (in Hebrew: Mikraot Gedolot) printed in Daniel Bomberg’s printing house in Venice between 1546-1548. The book includes the full Hebrew Bible in Aramaic translation with authoritative rabbinical comments of the era. The Pentateuch includes the written portion of the Torah; the Talmud is a rabbinic discourse over the oral law. In addition to the 1765-edition of the Babylonian Talmud from Sulzbach, huge folio volume of the Bibliotheca Magna Rabbinical is also presented. The famous work was published in Latin in Rome between 1675-1694 and it comprises the entire Jewish literature in Alphabet order from bibliographic point of view. The Mishneh Torah Maimonides (1138-1204), Sephardic Jewish rabbi, physician and philosopher’s main work is a summary of Jewish law in 14 volumes. The book, for centuries, had a decisive impact on the science of Judaism, many copied and commented its manuscripts and it had numerous print editions. To this day it is considered one of the major works of the Jewish religion science. The Mishneh Torah from 1809 might be one of the last publications printed by the Dyhernfurt May press. 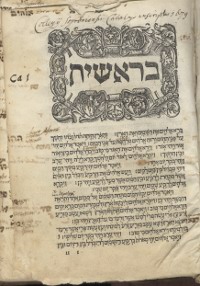 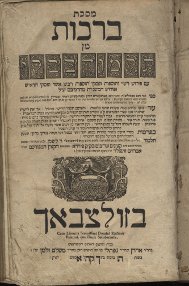 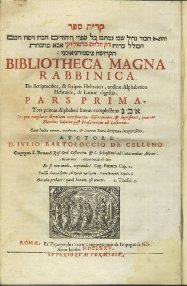 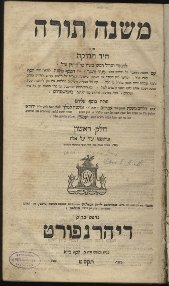 The most important sacred text of Christianity is the Bible. One of the most valuable manuscripts of the collection includes St Paul's letters. The code was copied in 1250 in Paris and it is decorated with gilded and painted initials. 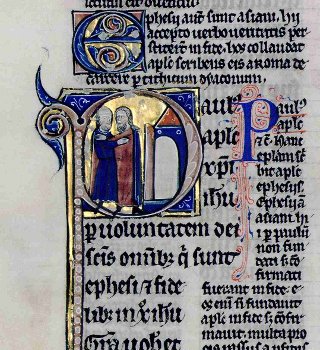 The masterpiece of patience and diligence is the 13th-century parchment “Biblia Latina” written in tiny letters. Among the codices, the library’s most beautiful, artistically decorated parchment can be seen as well. The 15th-century Psalter is lavishly decorated with gilt initials, floral motifs and small pictures and miniatures between texts.

The Christians belong to many different religious groups around the world. The exhibition houses the three main trends: Catholicism, Protestantism and Orthodoxy. One of the most beautiful pieces in the collection is a richly decorated metal-clad gospel book used in the former Malecz (Russia) Orthodox church. The volume introduction lists the names of all those who financially contributed to the production - printing, binding or decoration -, which also indicates that it is not an ordinary publication, but a liturgical book that was individually produced at high costs and was intended to be set at a special place. 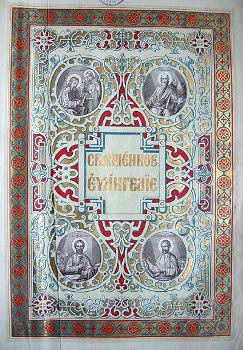 The Protestant theology’s most outstanding pieces are also presented: contemporary editions of Luther’s, Calvin’s, Melanchthon’s and Zwingli’s works. The library keeps Martin Luther's own Bible signed by the reformer himself. 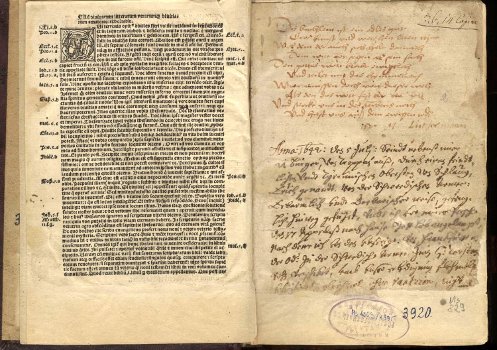 The most famous historical Atlas of the 18th century is the “Atlas Historique” by Henry Abraham Chatelain issued in Amsterdam. The seven-volume work was constantly made between 1705-1720. The image of the Grand Mosque in Mecca is featured in Volume 5 of the series. The shrine and mosque built around the Black Stone is the Islamic world's most important religious monument, the spiritual home of the Muslim community (umma), the holiest place. Besides the image of the Mecca mosque, Arab-Turkish-language manuscripts are on display from the 16th, 17th century. The 16th-century Arabic manuscript has a golden brown goatskin binding with oriental arabesque decoration, a typical Arab-Persian composition. 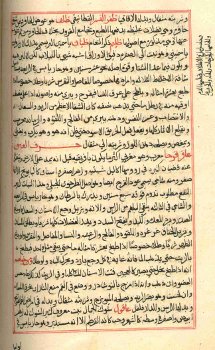 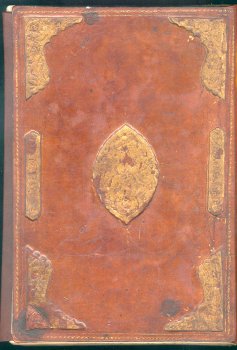 Along with the India Maps by the French geographer, Nicolas Sanson of the 17th century and the British cartographer, James Rennell of the 18th century, books on Hinduism and Buddhism are also on display. Among others, the “Brahma Vaivarta Purana”, a dissertation in Sanskrit language and a Buddhist meditation written on palm leaves in Pali language from the 16th century can also be viewed. The exotic manuscript comprises one of the most famous and most popular speeches of Buddha: the “Satipatthana Sutta”. 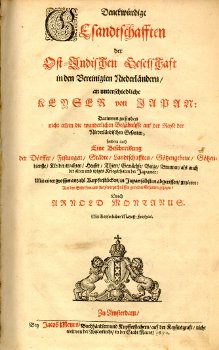 Walking among the display cases, visitors can admire the antiquity researcher’s, Bernard de Montfaucon’s artistic design albums as well as the great milestones of the history of cartography like Abraham Ortelius’, Gerardus Mercator’s world map or J. Baptist Homann’s, and Matheus Seutter’s folders on America and Asia. 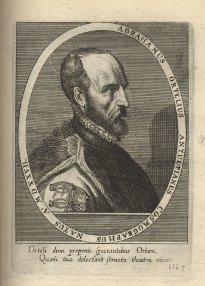 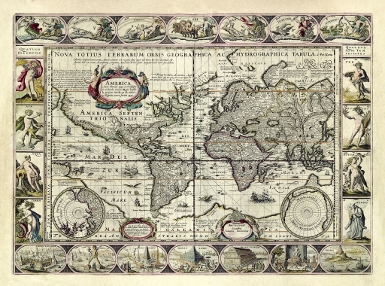 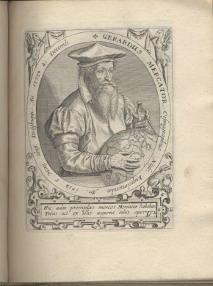 The temporary exhibition can be visited between April 1, and November 1, 2012.