By the beginning of the 19th century the collection contained more than 42 000 volumes. Many people visited Kalocsa to see the Baroque library room and the rarities of the collection. According to the guestbook that was kept from 1813 many famous Hungarian people visited the library including Gergely Czuczor, Flóris Rómer, Ágoston Trefort and Mihály Munkácsy with his wife.
During the primacy of Archbishop György Császka (1891-1904) the collection of the library reached a total of 60 000 volumes. The rooms could no longer store all the books and storage issue emerged. The archbishop decided to take a radical step: he had had a new detached library building designed. However, he wasn't able to carry his plan into execution because of his death in 1904. 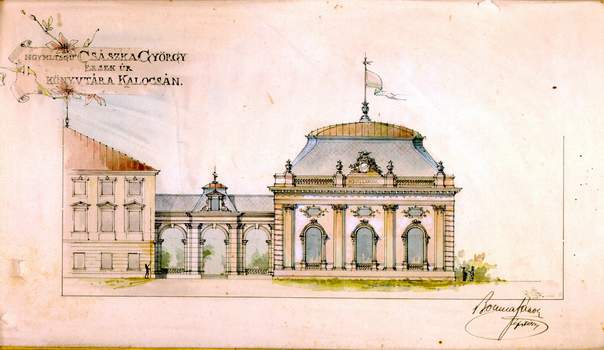 Signatures of Mihály Munkácsy and his wife in the visitors' book

Cardinal and Archbishop Lajos Haynald (1867-1891) was one of the greatest scientists and book collectors of his age. Archbishop Haynald was a botanist of European reputation, member of the Hungarian Academy of Sciences and other scientific societies. He left several hundreds of dedicated books to the library.
Lajos Haynald: A szentírási mézgák és gyanták termőnövényei (The Gum and Resin Plants of the Bible)
Kolozsvár: Miklós K. Papp, 1879. From the collection of Archbishop Haynald.
József B. Eötvös: Gondolatok (Thoughts)
Pest: Mór Ráth, 1864. With handwritten dedication by the author. From the collection of Archbishop Haynald. 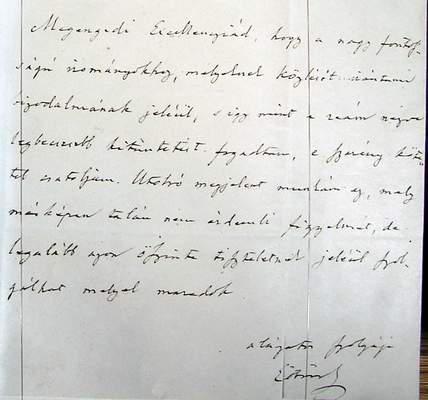 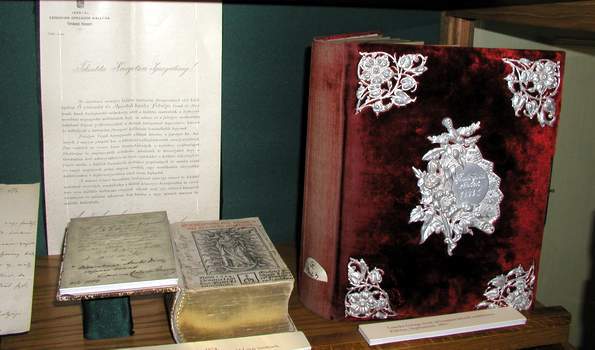 The Breviary of Archbishop Haynald and the memory album of Archbishop Császka
The stamp of the Cathedral Library, second half of the 19th century