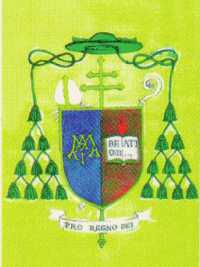 Jesus' last command to the disciples was: “Therefore go and make disciples of all nations, baptizing them in the name of the Father and of the Son and of the Holy Spirit, and teaching them to obey everything I have commanded you. And surely I am with you always, to the very end of the age.” (Matthias 28,19-20). The fulfilment of this command lasts until the end of time, and if intelligent beings are found somewhere in the Universe, our mission would also apply to them. Jesus gave a parable of what our mission will be like when He taught us about the tiny mustard seeds which a man took and planted in his field. Though it is the smallest of all seeds, yet when it grows, it is the largest of garden plants and becomes a tree, so that the birds come and perch in its branches. In other words, the Church provides accommodation for all the people within its walls. You might say that the history of the missions is the history of civilization and culture, as the Christ’s Ambassadors transmitted not only His teachings but other values of humanity as well to peoples to be evangelized.  At the same time we learned from them the history and the way of life of distant peoples. It happened in Hungary too, where King Saint Stephen asked for missionaries from the Pope and the neighbouring Christian peoples. Christianity in Hungarian became so strong that it had the power to evangelize other peoples in the most remote areas. This strength is proved by the work of the Jesuit monks who once lived in Kalocsa and the Kalocsa school nurses. They reached as far as the Far East where there are Christians today who are aware of the fact that missionaries came not only from Europe but also from Hungary, Kalocsa to be precise. The exhibition of the Archbishop Library and Treasury commemorates their arduous jobs, which often required imprisonment, suffering and martyrdom.

The temporary exhibition of the Archbishop Library called "Ambassadors for Christ, Missions, Trips and Pilgrimages” presents the story of preaching from the early apostles until the end of the 18th century. The history of the mission begins with the mission of the apostles. Jesus Christ sent his disciples to all people to preach the Gospel. Typical medieval depictions of the apostles can be seen in coloured wooden engravings in of one of the most magnificent incunabula of the Library, the “World Chronicle” by Hartmann Schedel that was issued in Nuremberg in 1493 as well as in prayer books illustrated with 16th-century engravings.

The oldest codices of the library can be seen quite rarely as they are the treasured gems of the collection. However, several parchments from the 13th century are now exhibited. One of the most unique items of the exhibition is an extraordinary 13th-century edition of a small pocket Bible written on a tissue-thin parchment in just a few-millimetres’ letters. One of the most valuable codices of the library contains St. Paul's letters from 1250. These letters provide poignant details about the Apostle of the peoples. In addition to the manuscripts, the Apostle's missionary paths can be followed in an atlas published by Nicolas Sanson in 1711. Reports on travels to the Holy Land and on medieval pilgrimages are also on display.  Konrad Beck, a German traveller took part in a pilgrimage to the Holy Land in 1483. In his handwritten diary, he describes his experiences and dangers they had to face during the trip. What is the most special in this book is that one of his late successors – to honour Konrad Beck - had the traveller’s 500-year-old beard piece bound in the cover of the book. Along with this masterpiece, the accounts of the Dominican monk, Felix Fabri of Ulm and the canon of Mainz, Bernhard von Breidenbach are also presented. The latter ones became the most popular medieval Holy Land guides. In addition to travel books, the natural science works by Konrad von Berg Megen that was published in 1475, and which is decorated with the engravings of imaginary creatures living in remote continents is also on display.

Prerequisites for the missionary activities that gained great momentum at the beginning of the modern age were set by the big discoveries. There are many rare maps and illustrated travelogues about the discoveries made in the 15th and 16th-century are on display at the exhibition. Especially valuable ones are the atlases by Abraham Ortelius or Gerardus Mercator.

Ortelius's America is one of the most famous "New World" representations. "Atlas Novus" by Gerardus Mercator published in 1638 in Amsterdam is hand-coloured. “America”, a multi-volume collection with high-quality engravings was published in a Flemish copperplate engraver’s, Theodor de Bry's workshop in the late 16th century. Bartolomé de las Casas a Spanish Dominican monk devoted all his strength and ability to the Indians’ cause and endeavoured to alleviate their fate. In his work he published his accounts on the atrocities the Spanish and Portuguese conquerors committed. Many documents of the exhibition commemorate the missionary activities of various religious orders. The Jesuits and members of the mendicant orders brought the Christian faith undertaking enormous difficulties, often superhuman sacrifices or even a martyr’s death. Besides the Bengali, Tahiti, Hindustan and Tatar-language Scriptures that were used to present the faith, a meditation book copied on palm leaves is also available for visitors to see. This exotic manuscript was bought on the island of Ceylon in the 16th century. Original letters written by Jesuit missionaries from China in the 18th century are also on display along with the Chinese New Testament and the works of Matteo Ricci. The spread of Christianity in Japan dates back to St. Francis Xavier’s arrival on the island in 1549. His letters along with Arnoldus Montanus’ illustrations and maps from the 17th and 18th century provide insight into the history of the Japanese missions. The Japanese translation of the “Our Father” copied by a Kalocsa priest, Gyula Kanyó. His manuscript contains the prayer in 254 different languages.