Water is the source of life, an essential and mysterious element. Earth, air, fire and water – in ancient times it was believed that these four elements make up our world. Earth’s surface is covered by two-thirds of water. This is the fluid that carries the embryo, the egg cell of all development and growth. This is the basic constituent of all organic materials and it is vital for all living things: humans, animals and plants alike. Its existence provides growth and its absence causes death and destruction.
This year in the 18th century baroque Patachich room of the Cathedral Library of Kalocsa a temporary exhibition opened: Holy streams, rivers, lakes and seas. Visitors can learn about the crucial role of water in human life, history, the development of great cultures and civilizations and its rich symbolism of the various religions through thematically placed documents.
We can read about ancient water in the Account of Creation. In the dawn of creation the spirit of God hovered over the waters and made it the source of all assets. The focus of Prehistory is one of the most popular short stories of the Bible, the story of the flood. In the biblical story of the Genesis Flood water signifies life, purgation, recreation and transcendence from the Red Sea crossing and the baptism of Jesus to the episode of foot-washing. On the 15-16th century illustrations exhibited the Bible’s stories come to life illustrated with pictures, including the 1541 Wittenberg edition of Martin Luther’s translation of the Bible and the 1493 World Chronicle of Hartmann Schedel doctor from Nuremberg. 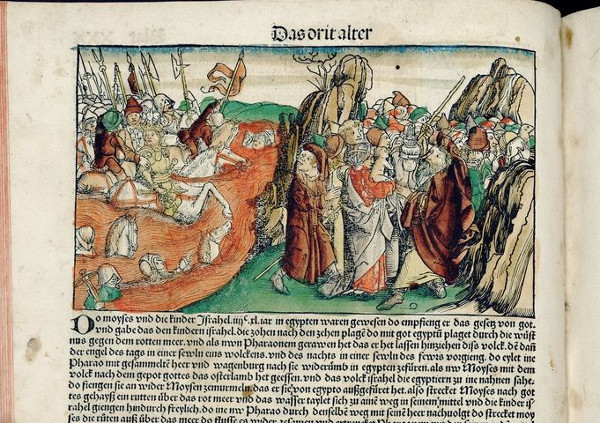 A medieval representation of the six-day long Account of Creation can be seen in a 13th century French parchment Code. The Genesis Flood and an etching of Noah’s Ark in a small rhymed bible summary decorated with the etching of Hans Holbein were created in 1543 in Lyon. 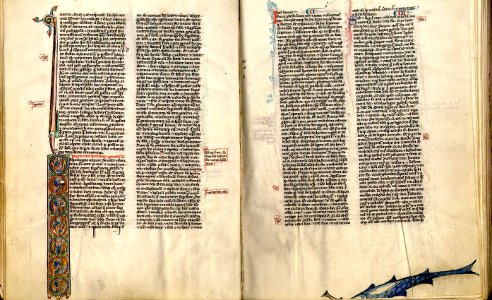 In ancient times Egypt was located in the valley of the Nile while Mesopotamia was situated between the Tigris and Euphrates rivers. A common characteristic of Egypt and Mesopotamia was their irrigated agriculture, the regulation of rivers and construction of canals. In ancient Mesopotamia, Egypt and the Greco-Roman mythology water plays a key role. 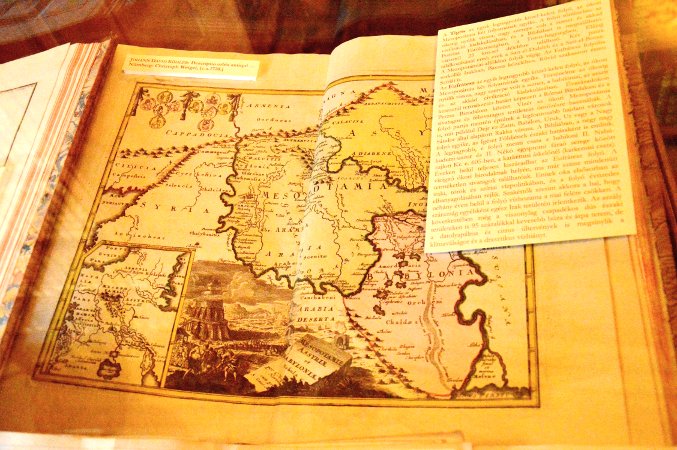 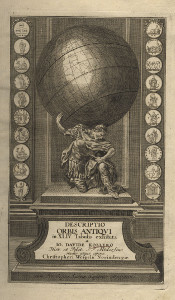 In Egyptian mythology Hapi is the God of Nile, in Greek mythology Poseidon is the God of Sea, his power extends to rivers and lakes as well. Mythological summaries, ancient maps and spectacular art history albums can also be found in the exhibition. Among the beautifully illustrated works of Joachim von Sandrart 17th century German painter and engraver an outstanding art-historical source is the Teutsche Akaemie der edlen Blau-, Bild – und Malereikünste published in 1768 in Nuremberg. 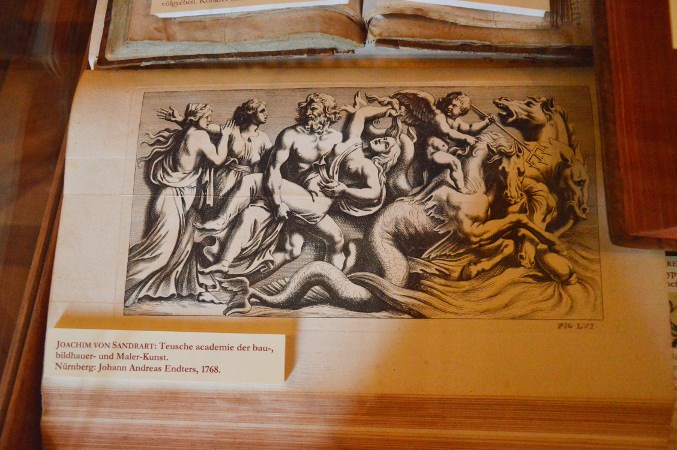 Water appears as a symbol of cleanness in many world religions, such as the ritual of bathing in sacred rivers or the ritual of washing hands. Hindus believe the Ganges embodies Ganga, the Goddess of purgation and even a drop from the river can purify the souls of the faithful pilgrims from their earthly sins. Ritual bathing is a permanent duty of all Muslim believers, for this very reason their bath culture had become extremely developed in the Middle Ages. Not far from the entrance of the Japanese Sinto Shrines there is a room where the faithful wash their hands and lips before they enter the shrine. In “Asia”, the work of Olfert Dapper published in 1681 in Nuremberg and the 18th century engravings of Swiss engraver, David Herrlieberger Hindu and Buddhist water-related ceremonies come to life. 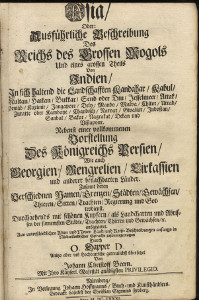 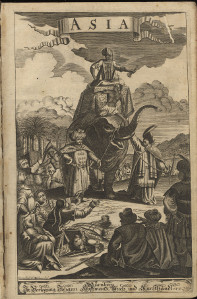 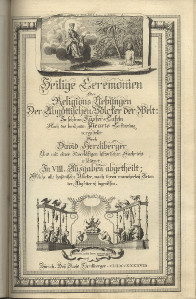 Many richly illustrated works, such as the travelogues of Arnoldus Montanus Dutch historian and Engelbert Kaempfer German doctor provide information about the religious beliefs of China and Japan. In Georg Bodenschatz’s work (Aufrichtig teutsch redender Hebraer, Lepizig, 1956) we can also read about the mikveh, the bath created for the bathing rituals of Jews. 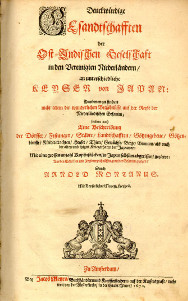 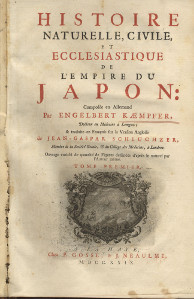 Water is essential for the human body, since it has to perform many tasks. Of the books related to anatomy, the human body and medicine many rare works about the history of medicine can be found in the exhibition. The Code of Hippocrates and Galen was created in 1360. 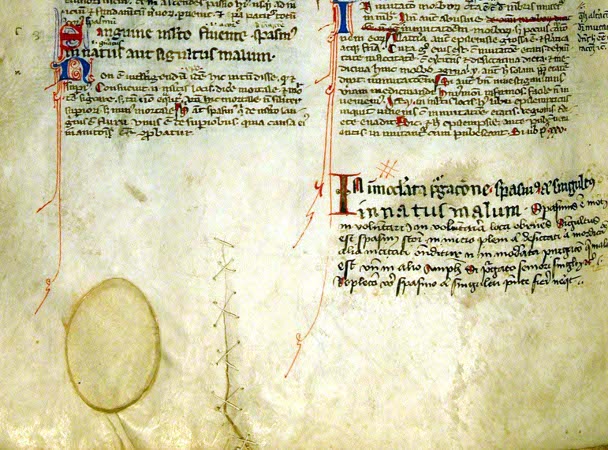 It contains the aphorisms and prognostication of Hippocrates and the medical acts of Galen translated and explained by African Constantine. One of our most beautifully bound Codices is a 314 page-long manuscript written in German and copied together by Konrad Schrecken in 1472. The manuscript collection includes 8 important pieces and this is also where we find the description of “water of life” among others. 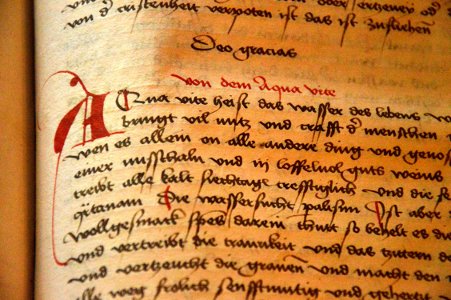 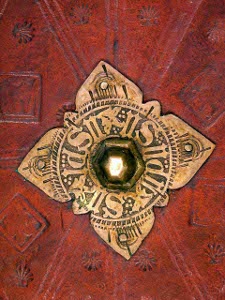 De humani Corporis Fabrica, the work of Andreas Vesalius published in 1555 in Basel is a landmark in the history of medicine. 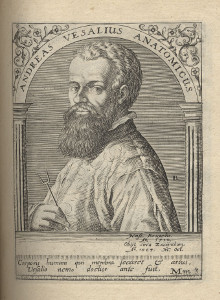 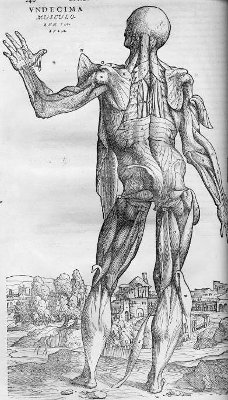 In the European and Hungarian Christian culture holy places are pilgrimage areas where often a spring or fountain is in the center of honor, or at least it is a part of it. Beside our holy shrines we often find holy fountains as well. The work Puteus aquarum viventium published in Hungarian in Nagyszombat in 1743 describes the wonders of the Mariavolgy shrine. 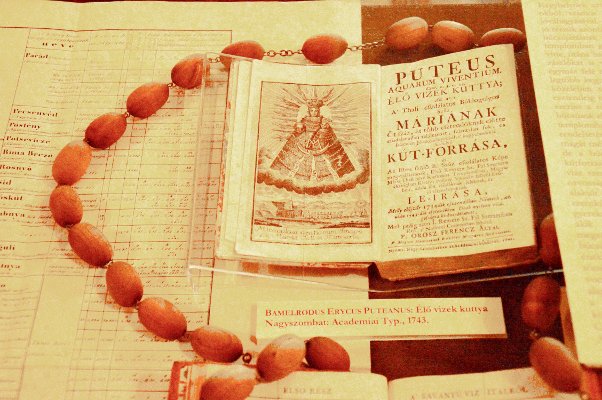 The Hungarian Spa culture is more than 2000 years old. The ruins of former baths, frescos and mosaics prove that the even the Romans discovered and used these thermal baths. The dissertation of Elias Oesterreicher (Analyses aquarum Budensium, 1781) describes the chemical composition of the fountains of Buda and other Hungarian springs through 283 pages. In 1783 Janos La Langue published a volume about the medical waters of Hungary. The study of Ferenc Nyulas published in 1800 in Cluj Napoca : Az Erdély országi orvos vízeknek bontásárólközönségesen, is the first major work published in Hungarian with chemical subject. Our visitors can also find two 19th century maps about the Hungarian thermal and medical baths in our exhibition. The thermal spa map of Ferenc Deutsch was published in Hungarian in 1849. His aim was to discover and review impeccable quality mineral waters that are suitable for consumption and are useful for preventing and treating various diseases. The artistically designed album of ancient researcher Bernard de Montfaucon, the big milestones of cartography history, such as the world map of Abraham Ortelius and Gerardus Mercator, or the portfolios of J.Baptist Homan, Matheus Seutter and Luigi Ferdinanso Marsigli delight visitors. 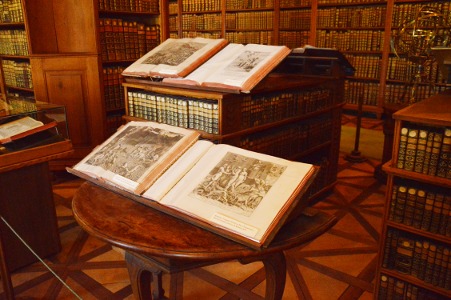 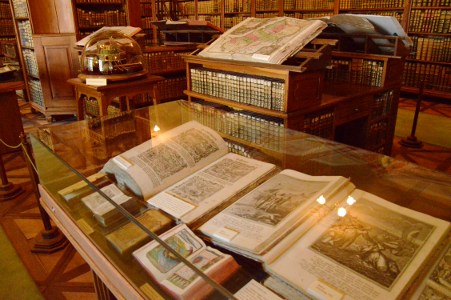 The temporary exhibition is held in one of the most beautiful libraries of the country, in the 18th century baroque reading room of Archbishop Adam Patachich from March 22nd, 2014 to December 31st 2014. (daily from 9am to 5pm except Mondays). 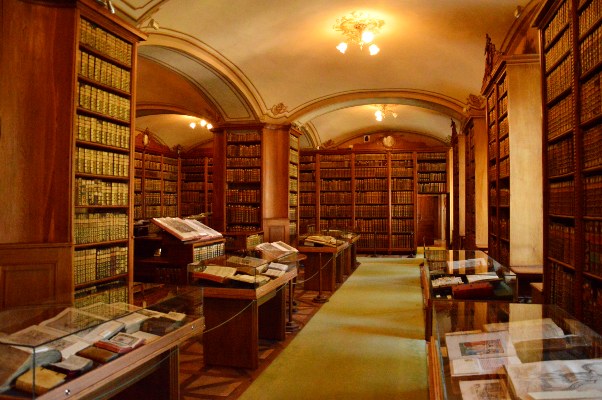